Fired Up to Finish – Fire Station 92

Home/News/Fired Up to Finish – Fire Station 92 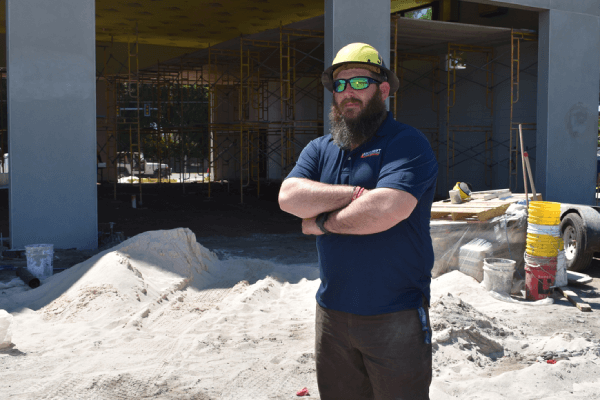 Fired Up to Finish – Fire Station 92

The town’s new fire station is nearing completion with features and facilities never offered before to first responders on the island.

During a tour of the site at 2162 Gulf of Mexico Drive, Fire Chief Paul Dezzi said the plan is to open around the third week of May.

“Seeing what we forecasted or what we wanted coming to what it is today, here it is, a thing on a piece of paper is now becoming a reality,” Dezzi said.

Since the demolition of the old fire station in June 2020, south-side firefighters have operated out of a temporary trailer directly north of the new station getting built.

“It’s very tight quarters. You have up to five guys in there at one time,” Dezzi said. “However, knowing that this has come to fruition and that there’s an endpoint to it, and they walk through [the construction site] and they see it, they know that they’re getting a good station.”

Dezzi said all 38 members of the Longboat Key Fire Rescue Department have had to adapt because construction is also going on at Fire Station 91 while firefighters continue to operate there.

The total cost of the project is $5,058,085, according to Longboat Key town projects manager Charlie Mopps.

Jon F. Swift Construction superintendent Shane Hamm is responsible for overseeing the Fire Station 92 project. The Sarasota-based company was formed in 1979 and has worked on a variety of projects in the area, including several on behalf of Sarasota County Schools.

“Shane has been interacting with these firefighters on a daily basis, and they’ve been getting updates from him and they’re very excited about just having a new, fresh place to stay,” said Jon F. Swift Construction marketing and operations director Emmalee Legler.

“You can see the front is not a traditional fire department or firehouse,” Legler said. “It’s got this really cool elongated wall, and the entrance is not even on the front of the building. It’s on the side.”

Hamm called it an honor to work on the project, which marks the first time Jon F. Swift Construction has worked on a fire station.

“[There are] hundreds of people that pass every day, and they stop and talk,” Hamm said. “And everybody is tickled how the progress is, how fast it’s going, and they can see the end result and they see what’s coming.

“I haven’t received one negative statement from anybody in passing, and they all talk every day.”

Fire Chief Paul Dezzi demonstrates how the new Fire Station 92’s red, yellow and green decontamination system will work. Firefighters will take two showers before they can return inside of the building.
In addition to the entrance on the south side of the building, the new fire station has many distinct features. It includes a decontamination area so firefighters returning from a call can clean and shower to do their best to remove possible carcinogens. The red, yellow and green system is an initiative of the International Association of Fire Fighters, Dezzi said.

The new fire station is going to be larger than the previous building, which was built in 1986.

“We’ll have a treatment center where people can physically go into a building, come into the building and be treated for their injuries or what have you,” Dezzi said.

Dezzi said the town looked at the possibility of a different site for the new fire station, but said the current location is best. Data shows it takes the town’s first responders an average of 5 minutes or less to arrive on scene responding to a 911 call.

Firetrucks, ambulances and other vehicles will be able to pull forward, around the back of the building and into one of the station’s three new garages. The building will also feature designated living facilities for both men and women, which the old south-side station didn’t have.

Both the south and north-side stations will be built to withstand 160 mph winds.

The south station’s driveway wraps around the structure and is also built so emergency vehicles only need to pull forward. There is also a slight incline so the structure abides by FEMA codes.

The new building will also have a new indoor gym for firefighters to work out.

“The residents of Longboat Key and the commissioners can rest assured that they are going to have a world-class facility here,” Legler said. “Their tax dollars are spent very wisely.”

Dezzi, Legler and Hamm also thanked the Longboat Key Club for allowing them to utilize part of the Harborside Golf Course to ensure the Station 92 project gets done properly.

“Seeing something that’s a cradle-to-the-grave type of thing, if you will, I mean, it’s incredible,” Dezzi said. “Really what has been really good about it is the communication that we’ve had with Jon [F.] Swift’s Construction crew.”

Hamm said he was thankful for the relationships the town has formed with the Jon F. Swift Construction workers.

“Station 85 is very similar to [Station 92], and the architect Todd Sweet who designed this fire station [also] designed that fire station,” Dezzi said. “The station down there currently is the one…it’s the newest one and they call it ‘The Resort.’

“This is a better one, so it’s a resort in my eyes as well.”

Perhaps there are some bragging rights between the municipalities’ fire stations, at least in the Dezzi family.

“You can share that with the chief down there,” Dezzi joked.