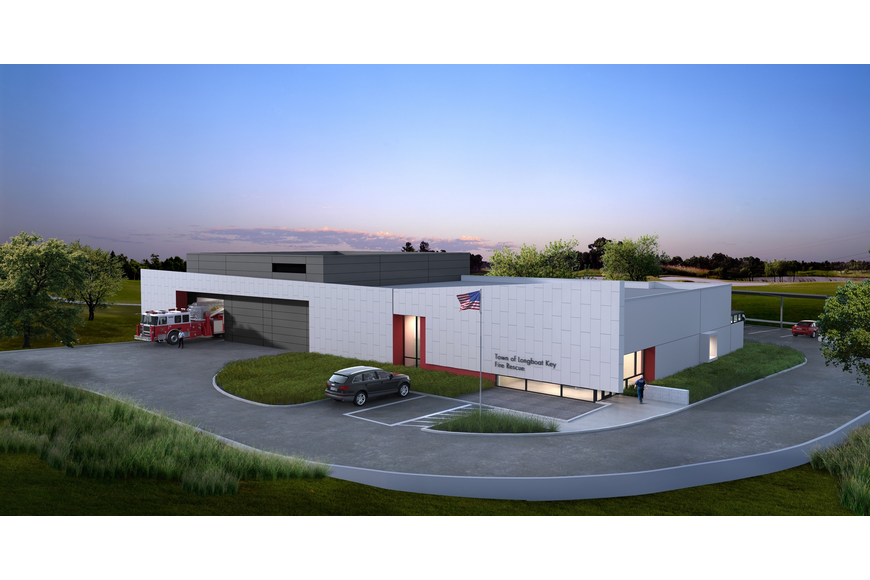 Longboat Key’s two fire stations will begin resembling something out of a “This Old House’’ episode this spring as renovation, demolition and construction projects begin, paid for by money authorized by town voters two years ago.

Work is scheduled to begin in May to renovate Station 91, the northernmost of the town’s two stations at 5490 Gulf of Mexico Drive, adjacent to the town’s police department. Likewise, demolition of Station 92, which fronts the Longboat Key Club’s Harbourside golf course at 2162 Gulf of Mexico Drive, is planned to begin in the same timeframe.  Firefighters will be housed in a temporary, four-bedroom structure on the site while work is underway.

The renovation project and the demolition-rebuilding project are expected to wrap up in April 2021, and cost of an estimated $5.01 million. Based on estimates developed from 60% completed plans, the Station 91 work will cost $814,000. The demolition and rebuild of Station 92 is $4.2 million.  Final guaranteed maximum prices are being finalized now.

Voters in the 2018 election, by a margin of 65% to $35%, authorized borrowing $5,895,000 for the two projects. Bonding is complete, and the financing is in place, town officials said. The town’s governing charter requires voter approval for borrowing anything over $5 million.

Station 92, which was built in 1986, will be rebuilt to modern standards, with gender-specific sleeping quarters and bathroom facilities for the firefighters and more public-facing amenities, such as a public bathroom and medical-examination room for walk-ups.

A third garage bay is also part of the design, along with a back-up generator to provide full power to the station, additional storage, a decontamination room for firefighter gear and a safe room that could function as a hurricane shelter or makeshift emergency operations center.

Station 91 will be renovated with many of the same features as Station 92, but since it was built in 1996, it already conforms updated building standards. Both stations will be built to withstand 160 mph winds.

Charlie Mopps, project manager for the town’s Public Works Department, said the town and Key Club management have been working out a final agreement on the placement of Station 92’s temporary living quarters. He said he hoped the building can be placed well before work begins.

“That way, that fire station, those firefighters can get comfortable with their new digs,’’ he said. The town had considered a variety of temporary housing options, but ultimately most of them adversely affected response time. The temporary facility will meet Americans with Disabilities Act standards to ensure visitors have access if needed.

Mopps said the town is working with the building managers in a number of ways to keep the project in budget, including setting both projects on a parallel timeline and the possibility of direct purchase by the town of some building supplies. Because local governments pay no sales tax, such purchases could reduce the overall price by a few percentage points.

“So when they go to bid out windows, for example, they can bid out everything,’’ he said. “They’re going through the same contracts, so they can get everything done at a lower cost.’’

“The budget is tight, and we thought it might be but we’ve been committed to deliver the fire stations that the chief needs and signed off, and he’s been involved with this the entire way,’’ Harmer said. “The scope has remained the same.”

Station 92 will be built three feet higher than the existing building, at 11 feet above sea level and will also be built with conduit installed for the possible future addition of  solar power, a feature Mopps said would cost an estimated $200,000 to $300,000 additional.

The building will be clad in a epoxy coated aluminum material, sandwiched with a fire-resistant core. He said it’s similar to material that makes up the exterior of Spaceship Earth at Epcot Center.

Also in the fire department’s plans this year are a new ladder truck, to replace one purchased in 2005 that is getting more difficult to maintain. A new one, with a ladder 75- to 100 feet tall, is expected to cost about $850,000 and take about 10-12 months to deliver.