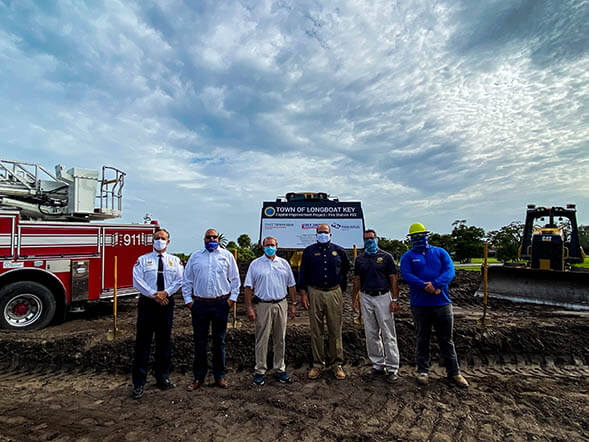 The town of Longboat Key and Jon F. Swift Construction held a groundbreaking ceremony for the Fire Station 92 project on Wednesday morning.

Town Manager Tom Harmer said he anticipates the town’s new south fire station at 2162 Gulf of Mexico Drive will be functional in about a year.

“I get excited about groundbreakings, but I get even more excited about ribbon cuttings, and so this is a big deal,” Harmer said.

South-side firefighters have operated out of a temporary trailer since the demolition of the old south-side fire station in June. Longboat Key Fire Department personnel at Station 92 will operate out of the trailer until the new fire station is built.

“My twin boys work at that Fire Station 85 [in North Port], which is the same floor plan as this station,” Fire Chief Paul Dezzi said. “When I [ask] them, ‘Do you like it?’ They go, ‘It’s a resort.’ That’s what they call it.”

The old Fire Station 92 building had stood since the mid-1980s. It was demolished in June.

Town voters decided during the 2018 election to authorize borrowing up to $5,895,000 for construction of a new fire station on the southside and renovating the north fire station.

The total cost of the project is $5,058,085, according to Longboat Key town projects manager Charlie Mopps.

“This firehouse here responds to twice as many calls than the north fire station,” Dezzi said. “We have a very busy area down here.”

Dezzi mentioned how the new fire station was going to be larger than the previous structure.

“We had females inside the bedroom with the males, and when I [came] up with the fire service back in the early ‘80s, that was no big deal, but things have changed now,” Dezzi said. “We now are able to go ahead and put individual bedrooms in for these firefighters here at Station 92 and also the station to the north.”

Dezzi also expressed his excitement for Station 92 to operate as what he calls a “clean firehouse.”

“If you think of a traffic light — the red, yellow and green — this firehouse is being built for that,” Dezzi said.

The red area is the contaminant area, the yellow area is for showers to allow firefighters to decontaminate themselves and the green area is the rest of the firehouse.

“We’re trying to get them to make sure that they’re clean and they don’t enter into the fire station with a contaminant because it’s a cancer initiative we have here,” Dezzi. “We didn’t have any of that in place at all.”

Both fire stations will meet hurricane codes, which means they will be able to withstand 160 mph winds.

“It’s critical. We’re a barrier island. We’re susceptible to tropical storms and hurricanes,” Harmer said. “We want to make sure we meet the latest building-code standards and elevation standards of the buildings.

“At the same time, if we were severely threatened, we oftentimes will evacuate the island, but we still want it to be sustainable so when we come back, it’s ready for us. It allows us to be here as long as possible, but also gives us a place to come back to.”

“We’ve been very hesitant about any type of gathers and we wanted to be extremely careful about this, but still felt like it was such an important project and we wanted to have kind of a public groundbreaking,” Harmer said.

“It’s great to see people out for the first time a while, and it’s fun to try to figure out who everyone is just from their eyes and their hair,” Schneier said. “If COVID-19 has reminded us anything about our purpose in government, it’s that our first responsibility is to ensure the safety of our neighbors on this island. No group better represents that purpose and responsibility than our firefighters and paramedics.”