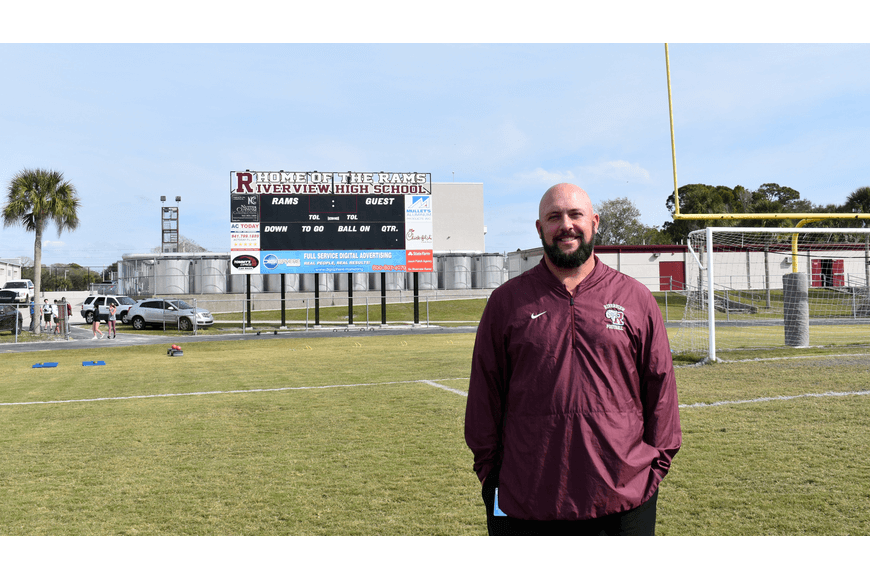 It’s a Friday night. It’s been raining off and on for the past few days, but the athletes in the locker room are ready to go, hearts pumping and adrenaline racing. Pregame pep talk went well, shoelaces are tight, and game faces are set. Then in walks bad news: The field is too wet and muddy to safely play, and the game is postponed.

It’s not a hard-luck tale from a high school football movie. It’s a situation athletes at Riverview High have experienced over the past few seasons — and one they hope will be gone forever with the construction of a new artificial-surface field and six-lane rubberized track this summer.

Although Riverview is first because of need, the rest of the county’s public schools are expected to follow within the next five years, said James Slaton, the district’s athletics director.

When the work is done, Sarasota will be the second county in Florida with artificial turf fields and rubberized track surfaces at each of its public high schools, Slaton said. Only Collier County offers the same level of athletics facilities in the state.

Costs aren’t final until a bid is submitted to the Sarasota County School Board on March 3, but a similar project at Cardinal Mooney High last summer totaled $2.6 million, though some additional work was done beyond field and track facilities.

Riverview football Coach Joshua Smithers said the change is a matter of safety.

“In the past, we’ve had to cancel big games, like one against Venice, due to so much rain on the field,” he said. “We were the only team in the area that couldn’t play that weekend. Sarasota played Booker [the same night], but our field was deemed unsafe and unplayable.”

Poor drainage from rain or flooding from nearby Phillippi Creek are usually the culprits behind the poor playing conditions. In addition to more availability, the new field would likely allow for fewer player injuries, Smithers said.

“If it rains, it’s slippery,” Smithers said. “We’ve had kids slip and injure themselves, and it was just from about a day of rain. Who knows if the field was the cause for it, but I do know that if they didn’t slip, they’ve got a better chance of not getting hurt.”

Currently, Slaton said the field is built below the flood plain. So the plans for the new field include raising it up about 3 feet and adding infrastructure under the field that will help it drain faster.

Slaton said with the upgraded complex, the field would be able to take on “massive amounts of rain, and within minutes, the athletes will be able to play.”

Brian Vogler, Riverview’s athletics trainer, said that when he started at the school two years ago, he didn’t realize how many athletes actually used the field for practice.

Currently, nearly every sport the school offers — a total of about 500 athletes — practices on the track or field at one time or another.

“When it’s used all year round, there’s divots, there’s potholes, there’s parts of the grass that I would say are more injury-prone, where someone is more likely to sprain an ankle,” Vogler said. “Whereas, if we have this turf, that issue would be nonexistent.”

The hope is that the fields will be ready for football camp for the 2020-21 season, something junior football player Michael Fraraccio said has been a long time coming.

“Our field right now is not level, and there’s holes everywhere,” he said.

“It’s going to look a lot better and be safer for us to play on.”

Aside from the athletic benefits, Slaton said this project will help bring the community to Riverview. He said the new track and field would attract more athletic events and could have the potential to be used for community events.

“I think it’s going to be a huge source of pride for Riverview High School and Sarasota County Schools,” Slaton said. “Riverview will be the flagship of this amazing project.”